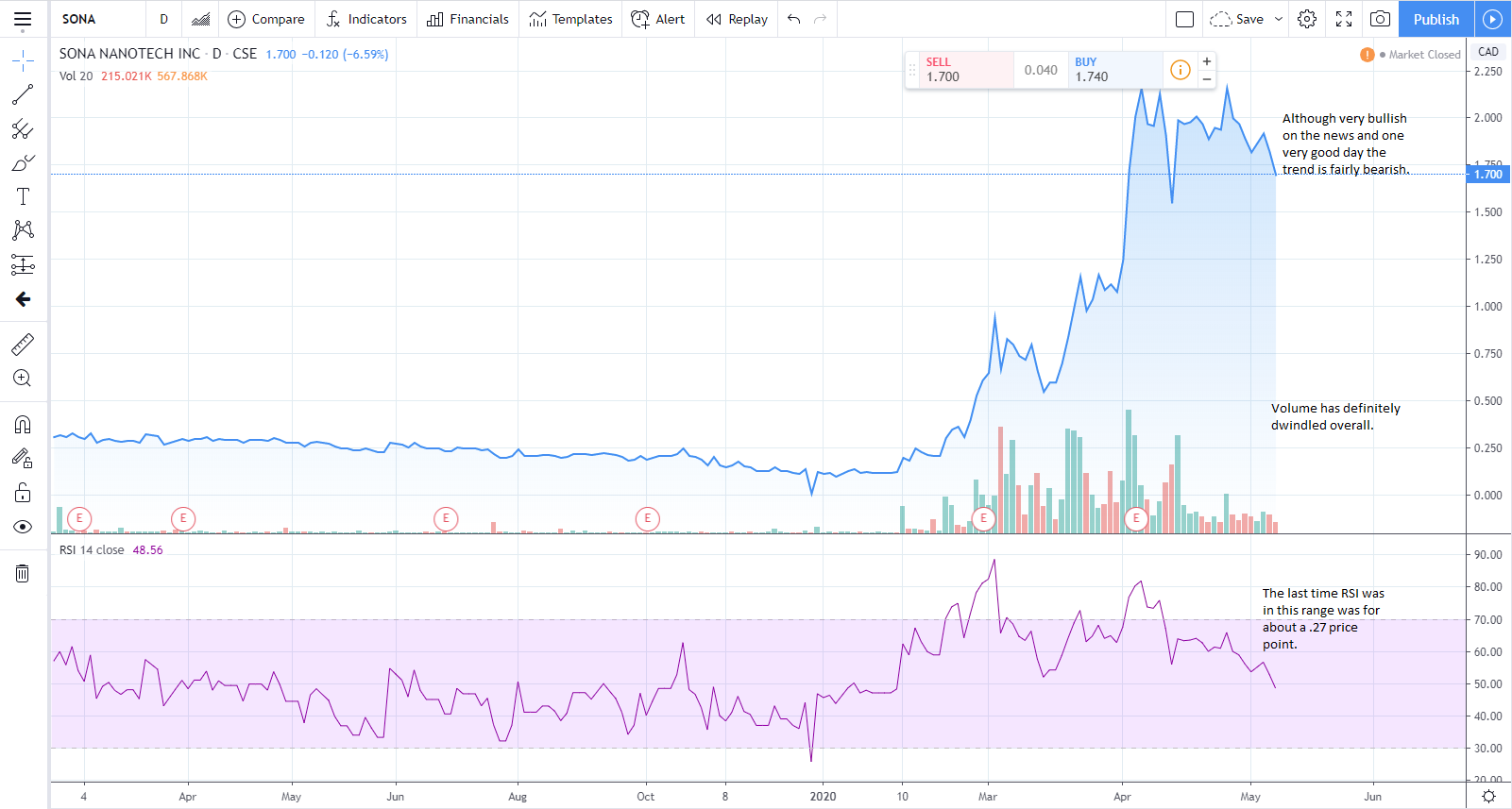 COVID-19 plays have been abound and in our discussions since as early as December of 2019. SONA Nanotech is a Canadian nanotechnology company that has mostly been under the radar hitting a low of 0.10 CAD in December of 2019 but with the appointing of a new interim CEO and the focus of their technology being placed into a lateral flow test kit for COVID-19 they have recently hit a high of $2.25 CAD: an increase of 2150%.

Biotech bombs like this bad boy are most traders’ and investors’ dreams. Generally speaking they can be difficult to find but with the advent of COVID-19 there have been many opportunities surfacing around the pandemic: PPE importers and manufacturers, testing kit developers, creators of equipment for screening, therapeutics, and even vaccine candidates. Having already had a massive run SONA itself does not look that promising technically:

SONA blasted to the sky but looks to have triple topped while also forming consecutive lower lows on low volume on this daily chart. The one saving grace is that the RSI is very cool relative to this new price range after just having had such a massive run. We also personally believe that less weight be given to technical analysis during this pandemic given the massive amount of market volatility.

There are a few important fundamental points to consider about this stock before thinking you’re going to catch a falling knife trying to buy in at these prices. The The federal government of Canada has SONA listed on their main website and awarded SONA $4.1 mill in a grant to allow them to be the “leader of a consortium” which included GE Healthcare meant to develop and optimize their testing kits. There have been various news outlets emphasizing the misuse of and generally faulty testing kits that have been imported from outside of the country. SONA have already been in their optimization phase for about one month to date and are being tested by third parties to ensure quality making them look even more attractive relative to the faulty kits.

Then comes pricing. SONA’s kit can produce results in 5-15 minutes and has quoted kits costing less than $50 CAD and likely will cost even less with larger bulk orders. With current kit orders already sitting at 2M through an LOI with Europe and with conservative bulk pricing of $27 (halfway between $25-$30 but it could likely be more) this would give the company revenues of $54M. We would also assume that with the federal government support and some more recent news of Chief Medical Officer Dr. Tam saying they would like to ramp up testing numbers to 3x what they were as of mid-late April from 20k a day to 60k a day Canada will most likely purchase a vast number of kits as well. We see revenues at ~100M with the manufacturing rates as are but SONA has also stated that it could ramp up numbers to 1M kits/week at maximum capacity. If this potential is reached and operated at for even a conservative 2 months of the year (COVID-19 and it’s hype will not last for ever) that would result in about ~$200M in revenue which does not include sales for the rest of the year. Market cap as of today put’s SONA at ~102.43M putting the revenue at double what the company is valued at today.

There are many plays right now to be made but with federal backing, a currently lacklustre kit market, and Dr. Tam wanting to charge forward in conjunction with the numbers given things look very promising for this particular COVID-19 play; just make sure you don’t miss the train into the blue sky.